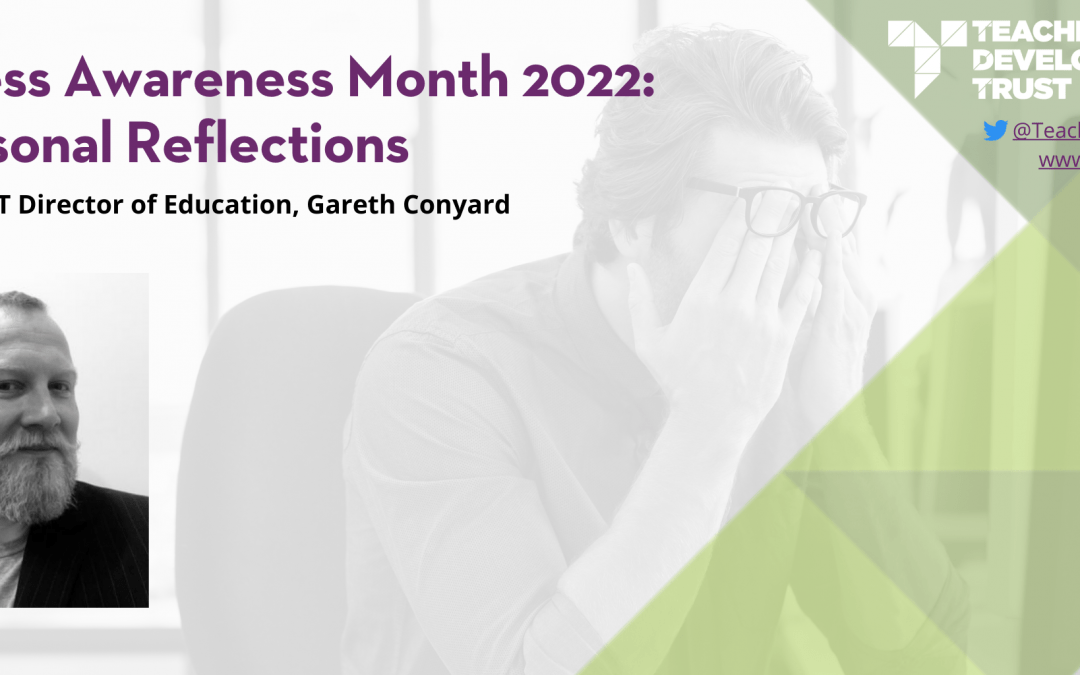 April is ‘Stress Awareness Month’. I have never fully accepted the virtue of designating a month (or a week or a day) to a specific theme. Or rather, I get the idea is to raise awareness, but the risk is that it becomes a tokenistic thing, a way of looking like you are focusing on stress, or wellbeing, or whatever, without actually making any meaningful change. As somebody whose own mental health issues (anxiety and OCD) are very much present all year round, I know that awareness raising and gimmicks are not the answer to improving anything. In fact, at their worst they just add another level of stress and distract from effective practice (as demonstrated by the excellent Kat Howard in her book Stop talking about wellbeing). Have you spent an hour meditating? Done your yoga? Do you even know how to breathe properly? And also, of course, done everything else you needed to get done today? Have you? HAVE YOU?

So you will be hopefully pleased to know I won’t be offering any quick fix solutions today.

Instead, I want to reflect a little on the underpinning evolutionary factors that can make it hard to enact meaningful changes in terms of our own wellbeing. Put simply, evolution is not driven by the intention of making us happy, but instead by the need to propagate. As Yuval Noah Harari puts it in Sapiens A brief History of Humankind, “just as the economic success of a company is measured only in the number of dollars in its bank account, not by the happiness of its employees, so the evolutionary success of a species is measured by the number of copies of its DNA.” To be clear, it is not that we are designed to be miserable either. Misery, happiness, joy, contentment, unease, frustration, anger – all these emotions have developed as part of an evolutionary process that is about passing our genes onto the next generation – no more, no less.

In his 2009 work, The Compassionate Mind, clinical psychologist Paul Gilbert sets out how we have evolved to operate in terms of the regulation of our emotions, with sometimes complementary and sometimes competing impacts. The first element he describes is the ‘threat and self-protection system’, fuelled by anxiety, anger, and disgust. It activates our ‘fight, flight, or freeze’ response when we feel threatened, or we are under excessive stress. The second element he describes is the ‘incentive and resource seeking system’, which feeds those positive feelings around motivation and achievement, providing a hit of dopamine as a reward for completing a necessary task. The final element is the ‘soothing and contentment system’, which is underpinned by feelings around connection to family and friends, creating a sense of belonging and collective purpose.

It is this final element that perhaps feels most appealing when we talk about wellbeing. Indeed, the chemicals associated with these brain functions include oxytocin and serotonin, which have been used widely in anti-depressants. But from an evolutionary perspective we can’t spend all of our time in a state of contentment. We need the incentive to seek resources, to provide for ourselves, our families, our communities, and we need the shock of fear to keep us safe in times of danger.  Evolutionary speaking, a ‘healthy mind’ is one that holds these different elements – threat, resource seeking, and contentment – in balance.  In a sense we are hard wired to not always be content, but also to feel fear, dissatisfaction, stress, even when we are notionally ‘happy’.

An understanding of this can be helpful in avoiding the quick fix gimmick – we are not trying to ‘fix’ a specific issue to make us happier necessarily, but rather working against the backdrop of millennia of evolutionary processes, and it takes more than a ‘stress awareness month’ to respond to that. That isn’t to say that there is nothing that can be done. The evidence is clear that we are able to change the ways we think and feel, to rewire our brain where needed, especially to respond to unhelpful imbalances between the different elements (for example, if our threat and anxiety system is sparking too often or at the wrong times, leading to Generalised Anxiety Disorder). But the combination of therapy, appropriate medication, and support takes time and effort, but it is worth engaging in to help achieve a better sense of mental balance, of wellbeing.

If you feel you would benefit from further support for your mental health, there are lots of organisations that can help. Of course, please contact your GP or your local NHS IAPT service if needed. There is also a dedicated charity serving those working in education, Education Support. For more general information or advice, please look at: