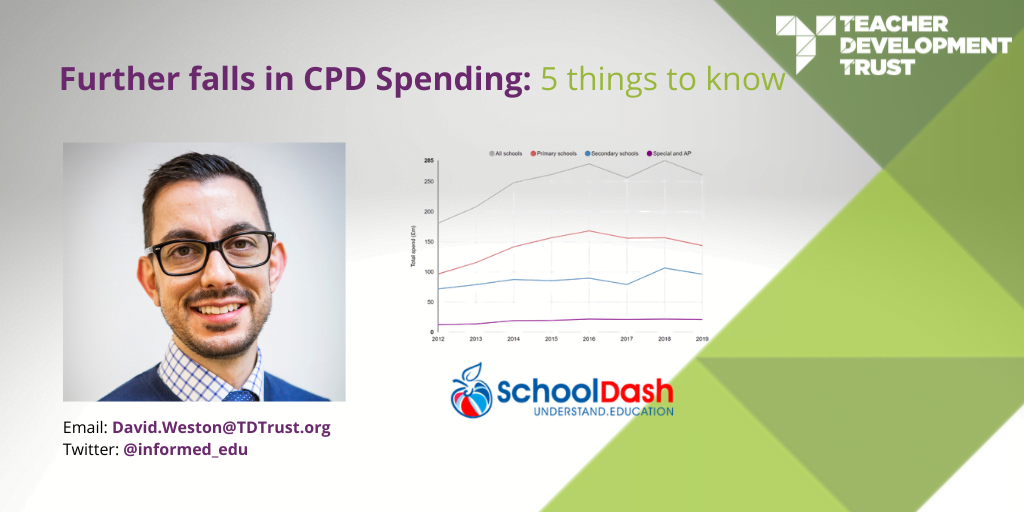 Headline findings include these 5 key points:

You can see more detail, including interactive maps and charts, on SchoolDash’s blog.

What are the implications? Well, raw CPD spending figures can’t tell us everything about school expenditure, because:

These are a lot of limitations! But the raw figures themselves still tell us a significant amount. These figures includes budget allocated to allow staff to engage in, for example, accredited study, whether Master’s level or other qualifications such as NPQs. They give us a very rough indication of how much opportunity staff may have to get out to external courses and conferences (aside from those ones funded in other ways). And while the level of spending can’t tell us how effectively the money is being spent, surely schools should be aiming to prioritise both effectiveness and the level of resource?

Today also sees the launch of the NAHT-supported School Improvement Commission which argues that professional learning should be at the heart of school improvement. At the TDT, we heartily agree, and will be co-hosting an event today alongside the Wellcome Trust and NAHT in which we start making the case for school improvement through professional development. Watch this space for more details…