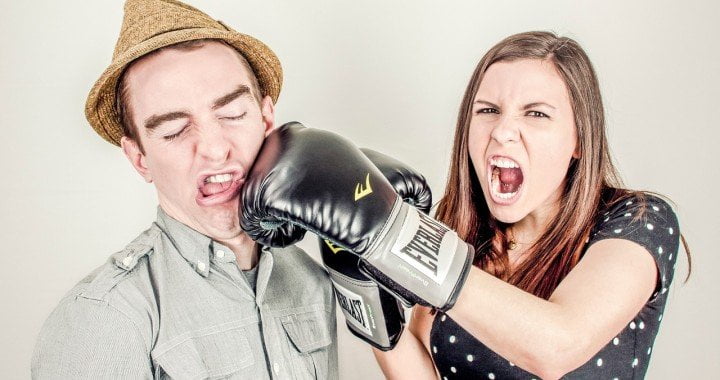 Wondering why that person is violently disagreeing with you? Are they misguided, deliberately annoying or just a bad person? Surprisingly, you might actually disagree rather less than you think.

In your brain, each word that you read is mapped to a specific set of experiences, emotions and connected ideas. This can mean that two people reading the same word can get completely different concepts and reactions in their heads. It’s a little bit like the classic image shown here – where one person clearly sees a duck, the other has no doubt it is a rabbit.

You think that a word you use is clear, but it really isn’t. If you say: “Play is a great way for children to learn”, you might have the idea “occasional unstructured learning with building blocks is a positive support for toddlers developing concepts of space” whereas someone else can easily believe you meant “pupils  in classrooms should be allowed to do whatever they like, including playing with games consoles, as it is a better way of them learning to read than formal teaching from the front of the class”. You didn’t mean that, but for the second viewer “play” had a different meaning, they thought “great way” meant you mean “only way, and better than all other ways”, that by children you meant school-age pupils, and by “learn” you meant numeracy and literacy.

Other examples are “ceasefire” which can be interpreted as “caving in to the enemy” or “stopping killing poor children”, or “evidence” which can mean ‘a thing I saw once’, ‘a fusty old out-of-date academic’s thesis’ or ‘a huge range of respected research papers summarised together’… or indeed many other things, depending on the beholder.

Of course, if neither of you stop to check what the other person means, you’ll be arguing completely cross-purposes and essentially wasting time.

You remember about that mapping between words, ideas and concepts in your brain?  If I say the word “orange”, you see a particular colour, a shape, possibly imagine a smell, taste and texture. You may even associate it with certain people, places, or memories. Therefore, if someone starts saying blue oranges are the tastiest then alarm bells may start going off in your head. The colour blue is simply not associated with the word “orange”, and you’ve never seen a blue version of the fruit. You also know which oranges you believe are the tastiest and they certainly are blue. This slightly uncomfortable mental feeling is cognitive dissonance. People typically frown or grimace when they see something weird or expected, and they are often literally ‘taken aback’.

It turns out cognitive dissonance is where some of our best learning takes place, but we’re also wired to try and avoid this unpleasantness if possible. Rather than have to accept that there are indeed blue oranges, it’s easier to assume that the person talking about the blue oranges is either deluded or deliberately lying to you. Perhaps they just made a mistake, perhaps they don’t take much care with their observations?

So perhaps the reason you’ve found yourself fighting quite so hard with this person on social media is that they’re actually telling you something which is just a little uncomfortable and your brain is battling to avoid cognitive dissonance? Maybe you should stop and ask some more questions – you might just learn something. Similarly, don’t be surprised (and stop taking it personally) when people fight you very hard if you suggest something that goes counter to their experience or values.

Thanks to @JamesTheo for making the following fabulous image after I suggested that we should all “run toward the cognitive dissonance and not away from it”.

Noticed how some people have a remarkably selective memory, and manage to only notice and share the articles, tweets, comments and blogs that agree with them? This is related to confirmation bias, the tendency to favour information that confirms one’s own beliefs. To quote Wikipedia:

“People display this bias when they gather or remember information selectively, or when they interpret it in a biased way. The effect is stronger for emotionally charged issues and for deeply entrenched beliefs. People also tend to interpret ambiguous evidence as supporting their existing position.”

You can probably see that this is a specific example of avoiding cognitive dissonance. The problem with confirmation bias is that it makes it more likely that anything heard or read is more likely to reinforce a view rather than change it. An extreme example would be that many members of doomsday cults saw the failure of the world to end on the predicted day as even more proof that they were right in the first place – possibly that their devotion to the cause prevented it this time, but that the world is even more likely to end next time. Essentially, it’s easier to rationalise away awkward cognitive dissonance that have to admit that you were probably wrong all along.

In social media arguments, you’ll see people rationalise away opposing opinion as ‘cultish’, ‘narrow-minded’, ‘lies’, possibly even as a conspiracy. You’ll also find yourself irresistably drawn to blogs, pictures, tweets and arguments that reinforce your feelings – you may even re-share them with “YES, THIS!” attached…

So bear in mind that you’re definitely filtering out opposing arguments without even being aware of it, and the irritating person you’re arguing with is doing the same. It’s not personal, it’s just psychology.

Arguments can very easily get personal, and in the heat of the moment it’s easy to come to the conclusion that your opponent is just a horrible person. This is partly an issue of the Fundamental Attribution Error. Essentially this is our tendency to want to explain an annoying action as a personality flaw instead of an unfortunate result of the situation the person was in.

An example would be that if a person suddenly brakes in the car in front of you, you’re likely to get angry and assume they’re a careless or foolish driver, rather than stop and consider if they were trying to avoid a dangerous situation.

In a social media argument this means that when you disagree with someone they are more likely to decide it is because you are objectionable and annoying rather than taking it at face value and see it as a simple result of the debate. Likewise, you almost certainly get annoyed with other people disagreeing with you and start making unwise assumptions about their character. You see this in politics all the time – it’s remarkable how often people assume that politicians who introduce policies they dislike must be evil people trying to destroy people’s lives.

The flip-side of this is just as worrying. If you make a mistake or annoy someone you’re more likely to explain this away as simply due to the situation or environment rather than a flaw in your own personality. In fact, we tend to be too quick to take credit for our successes and too slow to take the blame if things have gone wrong.

The result of this is that the more the argument goes on, the more you’ll feel smugly sure of your loveliness and certain that the other person is a complete jerk.

Typically people on social media will gradually separate in to tribes and then share messages and articles which reinforce their identity, while reminding themselves why they disagree with the other tribe.

It’s all down to our evolution, of course, but not really so relevant or helpful when genuinely engaging in open-minded debate. Stop getting cross if other people start cheerleading the person you’re arguing with, and discourage people from chiming in with ‘yeah, you’re right, that guy is a jerk’ type messages. Watch out for social reinforcement behaviour and do your best to try and see the world from the shoes of people in the other tribe. Remember, due to attribution errors you’re likely to mis-attribute them as having nasty or evil personalities when in fact this is just your brain attempting to reduce cognitive dissonance – they’re probably rather nice if you got to know them…